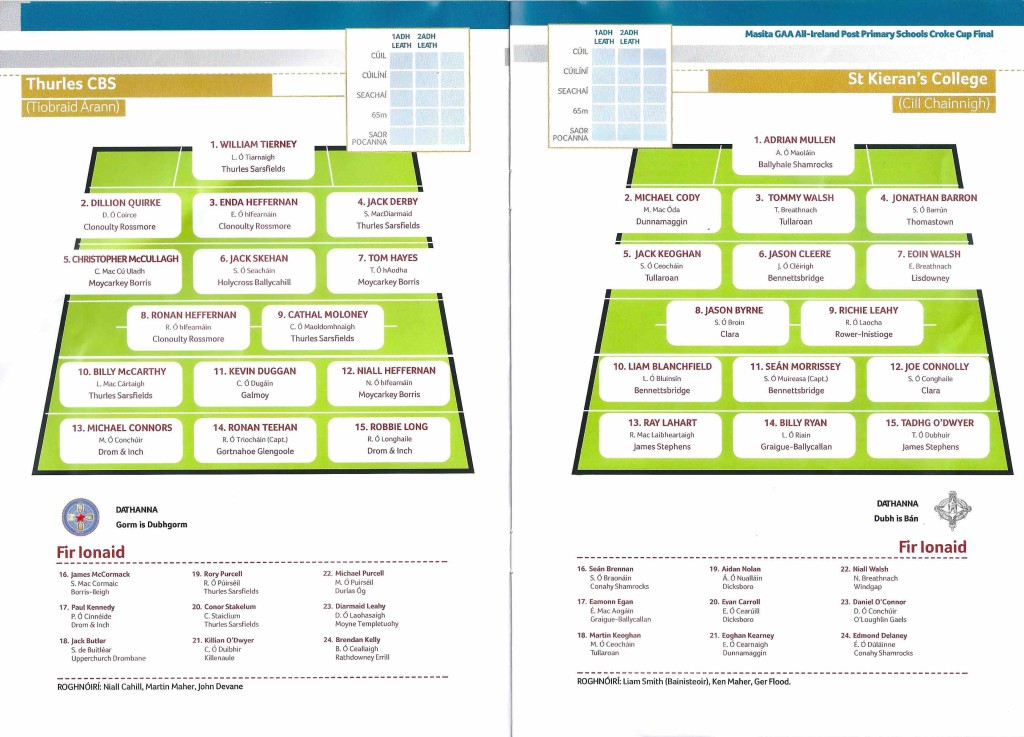 Semple Stadium in Thurles was the venue on Saturday April 4th for what proved to be a tense but absorbing All-Ireland Final between the Munster and Leinster Champions with St Kieran’s deservedly winning out in the end.

St Kieran’s started well leading 0-4 to 0-1 with 14 minutes gone until Thurles forward Michael Connors scored a goal which put them level. But the team were very quick to reply with an outstanding goal of their own, when 3 minutes later Ray Lahart gave a pass from his own 65 to Billy Ryan. Ryan ran out to the side gave a pass back to Lahart who ran all the way to the 21 and replied with a well worked goal. Click on Ray Lahart’s goal to see the TG4 video of the goal.

At the break, the College were up 1-10 to 1-7. Thurles came back into it fast in the second half with points from Jack Skehan and Niall Heffernan to bring the deficit to one point. The men in black and white came back with 4 unanswered points, one hard worked, one from Richie Leahy, two from Lahart who would end up with a total of 1-5 and the fourth from the other midfielder Jason Byrne.

Thurles struck back with 2 more points to make it 1-11 to 1-14 with 10 minutes left. Just before that corner back Johnny Barron went off injured and a few minutes later while trying to stop one of Thurles’s best players Billy McCarthy, Tommy Walsh and Eoin Walsh got bundled up in a challenge but continued playing.

In the 59th minute Morrissey scored Kieran’s final score to put them 4 ahead into additional time. However the Tipp men were not stopping playing yet and back up the field the ball went and corner forward Robbie Long nearly struck a ball but it went over the bar back to the a 3 point game. With 40 seconds remaining Thurles were awarded a free in which they needed a goal.  The ball was dropped in and won by substitute Eoghan Kearney who ran right beside the referee as the final whistle was blown.

Reflecting back on the year, this was one of the most successful years in the history of hurling in St Kieran’s College. The team was undefeated all year and in the process captured the Leinster League, a record 53rd Leinster Title and a record 20th All-Ireland Colleges Title. Great credit is due to all of the players and to the management team of Mr Liam Smith, Mr Ken Maher and Mr Ger Flood.

Well done to everyone involved on this outstanding achievement as another glorious chapter is added to the proud hurling tradition of St Kieran’s College.

For all the match reports in the Kilkenny People on Wednesday April 8th click on the links below.

Click on Defiant Kieran’s make it 20 for John Knox’s report on the game.

Click on The ‘Super Saints’ grew up as champions together for John Knox’s post-match reaction from Thurles.

For reports in the National Newspapers click on the links below.

For photos from the game courtesy of Maurice Walsh please click on the photo below.

To see photos of the presentation and post-match celebrations courtesy of Maurice Walsh  please click on the photo below.

The Path to the Final

For photos, video and report on the All-Ireland S/F victory over Presentation Athenry.

For photos, video and report on the All-Ireland Q/F victory over Rochestown, Cork.

For photos, video and report on the Leinster Final victory over St Peter’s, Wexford.

For photos, video and report on the Leinster S/F victory over Good Counsel, New Ross.

For photos, video and report on the Leinster Q/F victory over Kilkenny CBS.

For photos and report on the Leinster League Final victory over Borris CS.

For photos and report on the Leinster League S/F victory over Kilkenny CBS.