The following is how the teams lined out on the day: 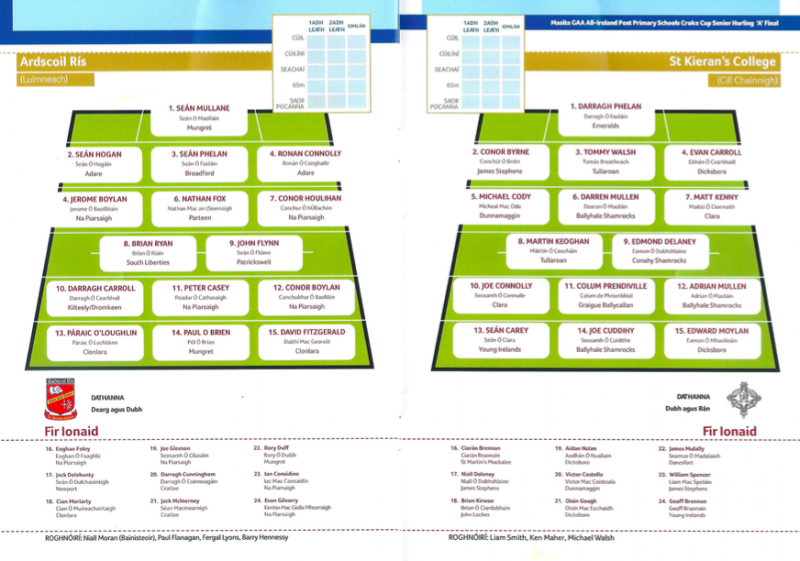 Semple Stadium in Thurles was the venue on Monday March 28th for what proved to be yet another tense but absorbing All-Ireland Final between the Munster and Leinster Champions with St Kieran’s deservedly winning out in the end.

Ardscoil Rís made the early running to be ahead 0-6 to 0-4 at the end of the opening quarter but St Kieran’s quickly drew level with Adrian Mullen to the fore and it was 0-6 apiece by the 19th minute. Soon after, the College pounced for a crucial goal when Joe Cuddihy got on the end of a ball and, having been hooked, managed to skilfully pull on it into the net.

St Kieran’s were 1-8 to 0-7 clear at the interval yet Ardscoil Rís received a huge boost early in the second-half with a goal almost immediately after the restart. But that was not the impetus for Árdscoil Rís to push on and instead St Kieran’s took over. Colum Prendiville raised a white flag and Joe Cuddihy emerged as the focal point of their attack as he picked off three points in a row. It was 1-12 to 1-7 in favour of St Kieran’s before Ardscoil mounted a strong rally in the last quarter. Árdscoil had four unanswered points until Edward Moylan popped up to score a point for the College which made for a nail biting finale. The margin was now down to two, 1-13 to 1-11 with eight minutes remaining.

Adrian Mullen pushed St Kieran’s three clear before O’Brien landed a pair of frees to cut the gap to just one point. However, despite keeping in touch, Árdscoil could never break down the resilient St Kieran’s defence and were unable to draw level. Joe Connolly landed the insurance point to seal glory for the College in the final few seconds and St Kieran’s were crowned All-Ireland champions for the 21st time. Tullaroan clubman and captain of the team,Tommy Walsh accepted the Croke Cup.

Reflecting back on the year, this was one of the most successful years in the history of hurling in St Kieran’s College. This team won the Leinster League, a record 54th Leinster title and a record 21st All-Ireland Colleges title. Not only that, but this All-Ireland victory made it an historic three-in-a-row All-Ireland Colleges A Senior hurling titles for the school, a feat which has only been accomplished once before in the school’s history in 1988, 1989 and 1990. Great credit is due to Mr Liam Smith who managed all of the three-in-a-row All-Ireland winning teams from 2014-2016 and who also won an All-Ireland Colleges title as a Leaving Certificate student with St Kieran’s in 1992. Well done to everyone involved on this outstanding achievement as another glorious chapter is added to the proud hurling tradition of St Kieran’s College.

For reports in the National Media click on the links below:

Match Report from The GAA.ie

The 42.ie All Ireland Match Report