THE jubilation which greeted the news that the successor to Most Rev. Dr. Collier as Bishop of Ossory would be Dr. Peter Birch was nowhere more evident than in St. Kieran’s College; by none was the news received with greater pride than by sons of St. Kieran’s, past and present. One need not seek widely for the reason. For it was the publication of Dr. Birch’s history that established the fame of St. Kieran’s as being the earliest Catholic college to be founded in this island after the relaxation of the Penal Laws. In turn, the work gained for the author the reputation of expert historian and a leading authority on Catholic education in Ireland.

Dr. Peter Birch was born on 4th September 1911 at Tullowglass, Jenkinstown, Co. Kil­kenny, son of Mr. Martin Birch and the late Mrs. Birch. He received his early education in Clinstown National School, and St. Kieran’s College, which he entered in 1925. In 1930 he went to St. Patrick’s College, Maynooth, where he was ordained on 20th June 1937. After ordination he did post­graduate studies in the Dunboyne establish­ment, and in 1938 returned to his Alma Mater as Professor of English. He received his M.A. degree in 1941 for a study of the poetry of Shelley, and in 1951 his history, St. Kieran’s College, Kilkenny, for which he obtained a Doctorate in Philo­sophy, was published by Gills of Dublin.

To make widespread the story of St. Kieran’s College-hazardous in its begin­nings, nomadic in its progress. ultimately a success story-had long been a dream of the late Bishop Collier. He, who in his time had also been Professor of English in St. Kieran’s, relieved Father Birch from his teaching duties for a year in order to do the necessary research and write the College history. The published work not only traced the progress of our seminary from its foundation by Dr. Troy in 1782, but also proved a valuable contribution to that most neglected branch of Irish social history-Catholic education. The Social Science courses sponsored by the Extra-mural Studies Board of University College, Dublin, which commenced in Kil­kenny in 1949, owed much of their success to the initiative and industry of Dr. Birch. When the Chair of Education became vacant in Maynooth in 1953, Dr. Birch received the appointment, and, in addition, became Lecturer in Catechetics. While in Maynooth he grew to be a recognised authority on youth problems by reason of a number of pamphlets which he wrote on the subject. One that attracted considerable attention was The Adolescent and the Modern World. He also wrote articles for Irish, English and American Catholic magazines. In August 1962 the Apostolic Nuncio announced the appointment of Dr. Birch as Titular Bishop of Dibon and Co-adjutor Bishop of Ossory with right of succession. The consecration ceremony took place in St. Mary’s Cathedral, Kilkenny on Sunday, 23rd September 1962. The consecrating pre­late was the Apostolic Nuncio, Most Rev. Dr. Sensi, and the co-consecrators were the Bishop of Ferns, the late Most Rev. Dr. Staunton, and the Bishop of Kildare and Leighlin, Most Rev. Dr. Keogh. Other members of the hierarchy present were the Archbishop of Cashel, the Bishops of Killaloe, Cloyne, Limerick and the Auxiliaries to the archdioceses of Armagh and Dublin, the former Bishop of Cameroun, and the Lord Abbot of Portglenone, Right Rev. Dom Aengus Dunphy, O.C.R., who was a former pupil of the new bishop. Among the dis­tinguished congregation were the President of Ireland, Mr. de Valera, and two former Presidents, Mr. W. T. Cosgrave and Mr. Sean T. O’Kelly; the Taoiseach, Mr. Lemass and Mr. Frank Duff, founder of the Legion of Mary.

“I ask you to let me share with you your happiness that the new bishop is coming home”, said Rev. John McMackin, Professor of English, Maynooth College, in preaching the special sermon on the occasion. “And I think you will even allow me to wish that he could have come to you without going from us”. It is axiomatic that the creation of a new bishop should mean a reappraisal of affairs in his diocese, the opening up, as ’twere, of new frontiers. It is fortunate that those first to benefit from the ministrations of Dr. Birch are the voiceless ones in our community, the aged, the physically and mentally handi­capped, the lonely, the youth. May we voice the sentiments they feel so deeply, and wish our new bishop ad multos annos. This issue of ST. KIERAN’s COLLEGE RECORD does not boast, nor is encumbered by, an editorial, but a capsule one might appro­priately be inserted by quoting Dr. Birch from our very first number where he appealed to past students of the College to forward any information they might come across about St. Kieran’s, or St. Kieran’s men, in order that a place for its preservation might be found in the pages of this magazine. “And let it not be considered”, he wrote, “as savouring of vanity or pride, but rather as pietas or piety in every sense of the term. The example of these predecessors, no matter what walk of life they may have traversed, would provide useful stimulus to their successors of the present day who stroll around by the alleys, and chat or day-dream as they did in their day. What they found useful from their contact with life would serve as a directive for those who sit nightly in the study halls preparing for that life, or who are planning for the future as they kneel in the College chapel. And the composite picture formed from their experiences, good or bad, would provide information for all who are planning the direction that Irish education should take”. 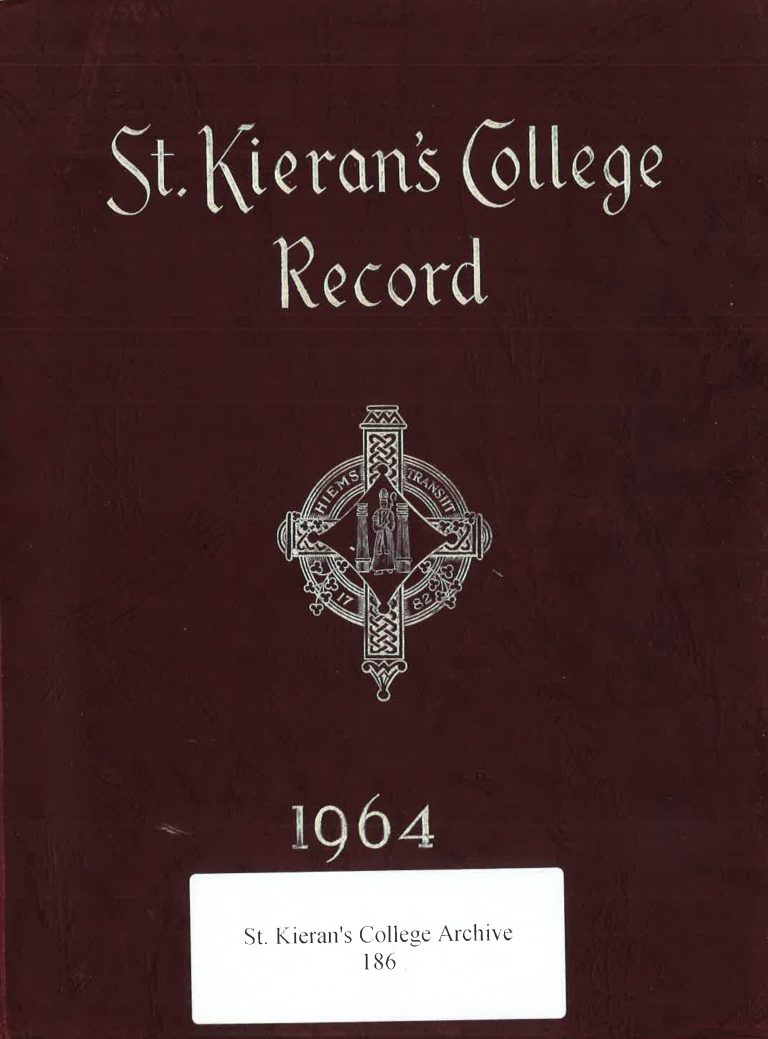 We are delighted to have been selected to participate in the Active School Flag Programme. This initiative has been rolled out across the country as Primary School level and is now being piloted amongst a small number of schools around Ireland at Post-Primary level. Our Active School Team of Transition Year students aim to help […]