I know how important Reunion is. We need to support, encourage and affirm one another more than ever. The reunion event brings us back to the place where friendships were formed, talents were acknowledged and skills were honed.

A special word of congratulations to this year’s jubilarians – priests celebrating diamond, golden, ruby and pearl jubilees of their priestly ordination. In pandemic times I’m particularly conscious of the many who are joining us through the live-stream or perhaps may watch this Mass at a later hour. Like all aspects of our life we must be innovative around this reunion in the awareness that it’s good to gather, and if we cannot physically, at least virtually lets give this time to one another.

A warm welcome to those who have chosen to safely gather, respecting social distance in this College Chapel that holds memories for many of you.  I also welcome the priests, family and friends who join us online. I welcome Fr. Benny who is representing the English priests who have gone through the college.

Peter speaks to Jesus in Matthew’s gospel: “we have left everything and followed you”[1]. The vocation call thirty, forty, fifty, sixty years ago was radical, and brave men like yourselves responded generously; the vocation call today is even more radical and counter cultural.

Has our world become deafened to that call? Have we become dispirited in encouraging a positive response? Have our faith communities, our pastoral areas more to do in that space so that the faith communities of tomorrow and beyond are equally as well served as in the past?

Let us pause a moment as we immerse our story of vocation and response into the story of the life, death and resurrection of Christ …

Yesterday in Paulstown I buried An tAth. Seán O’Laoghaire (Fr. Jack O’Leary) – he was our oldest Kildare & Leighlin priest, we were very proud of him – he died two months shy of his 98th birthday! He was the Maynooth class of 1949, his class of 77 men kept the great tradition of reunion alive. Jack was the last surviving member of that class.

Some Ordination classes are good for making time for a reunion. A reunion brings in itself many threads. There are the various catch-up conversations. There are the walks on the hallowed pitches that is St. Kieran’s College. There are the memories of the hurling matches won and lost; the memories of formators who left lasting impressions and perhaps memories of a concert, a play or a debate that remain as fresh today as the day we were on stage or at the podium. There is the celebration of the Mass and remembering of absent friends who have since chosen other paths or passed away much too quickly into eternity. There is the later meal and the banter that goes with table fellowship. All different but essential threads that make up the complete tapestry of what the St. Kieran’s College Priests’ Reunion has come to mean.

There are those celebrating significant jubilees this year, all acknowledged so well by Fr. Dermot Ryan, the College President. Priests from different dioceses, indeed different countries. All politics is local! A particular word of congratulations to those jubilarians ministering here in Ossory. I think of Peter Hoyne and Lar Dunphy both 60 years ordained; Eamon Foley, Larry Wallace and Bishop Seamus Freeman all three 50 years ordained; Eamonn O’Gorman, Johnny Condon, Willie Purcell and Tom O’Toole all 40 years ordained and Tom Corcoran 30 years ordained. I am also conscious of the St. Kieran’s College alumni elsewhere marking significant anniversaries. To all of you I say ad multos annos.

There are colleagues, classmates, alumni who have died since the last St. Kieran’s College Priests’ Reunion. I immediately think of Bernard Canning, Diocese of Paisley; Eamon Tobin, Diocese of Orlando; Thomas Sheridan, Diocese of Cheyenne; Michael Dillon, St Patrick’s Kiltegan; John Cairns, Diocese of Nottingham (1988) and Joe O’Donnell, Diocese of Raphoe (1988) who died 2 years ago. I include this evening those I remembered at our Chrism Mass last March: Jim Cassin; John Lawlor; Percy Grant and Jimmy Dollard. May they all rest in His peace and in His light.

This evenings Reunion overlaps beautifully with the Feast of Our Lady of Knock. In recent months Pope Francis honoured Knock not only as a Marian Shrine but also a Eucharistic Shrine.  The story of Knock is familiar to all of us – fifteen witnesses of the apparition at a gable wall on a wet evening in 1879. The Eucharistic element is critical to the Knock apparition. The image of Our Lord as Lamb of God on the altar in the apparition chapel is powerful for me. Eucharist is critical to our lives as priests.

I think our big project post pandemic will be placing the Eucharist once again at the heart of the week for our parishioners, for our families, for our friends. The Mass on Sunday is a way of affirming that life has meaning and that whatever we may be going through, there is a place around the altar for all of us. I was a bit concerned in the height of the pandemic there was much talk of eucharistic starvation as if receiving Eucharist was personal and not communal.

We gather in order to be sent out. We receive to bring Him to others. We go out to be His body to those we encounter for the rest of the week. We become what we receive. While the Sunday obligation was rightfully removed at the beginning of this pandemic, I hope we have by now gone beyond the obligation phase. But we need to earnestly welcome parishioners back on Sundays. We need to make Sunday great again! Perhaps in time to come we may see this brute of a pandemic which has brought huge suffering to many as something that has given us as priests and people a deeper understanding of Eucharist in our lives.

Reunions are about people. I want to conclude with the story of a Redmond Prendiville or better known as “Mundy” Prendiville, a Kerryman who became the fifth Archbishop of Perth. He began his studies for the priesthood in 1918 in All Hallows College but was expelled in 1921 for playing cards! He then went to St. Peter’s College in Wexford for theology but was released from there because he played on the victorious Kerry team in the 1924 All-Ireland football final. Whatever about slipping out without the required permission during term time for the match, he was fortuitously named ‘man of the match’. St. Kieran’s College came to his rescue and enrolled Prendiville and he was ordained from here on 11 June 1925. Had St. Kieran’s College become a “refugium peccatorum”! It is stories like these that keep Reunions like this evenings so important in all our lives. Blessings on all this evening. 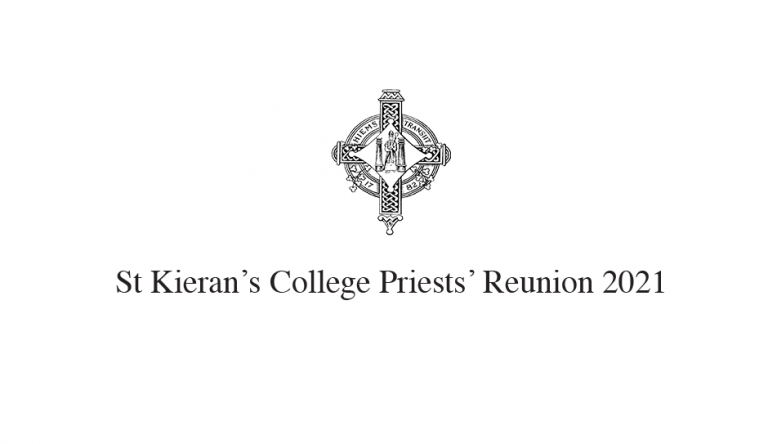 Please note: It may be necessary to reschedule some of the above times and dates. Please check the school website throughout the year for confirmation of the most up to date information.

Please visit the Covid-19 tab on our website for the most up to date safety advice from DES and HSE throughout this pandemic available here: Covid-19

Please see the Key Dates section of our website for details about the staggered return to school for all students. These, and other dates, are available here. School Homepage

Well done to all students who were presented with End of Year Awards. At this time every year, we recognise the exceptional hard work, talents and efforts of our students. Subject Awards, Awards of Merit and Sports Awards were presented. The highest accolade for each of the Year Groups is presented to our Students of […]